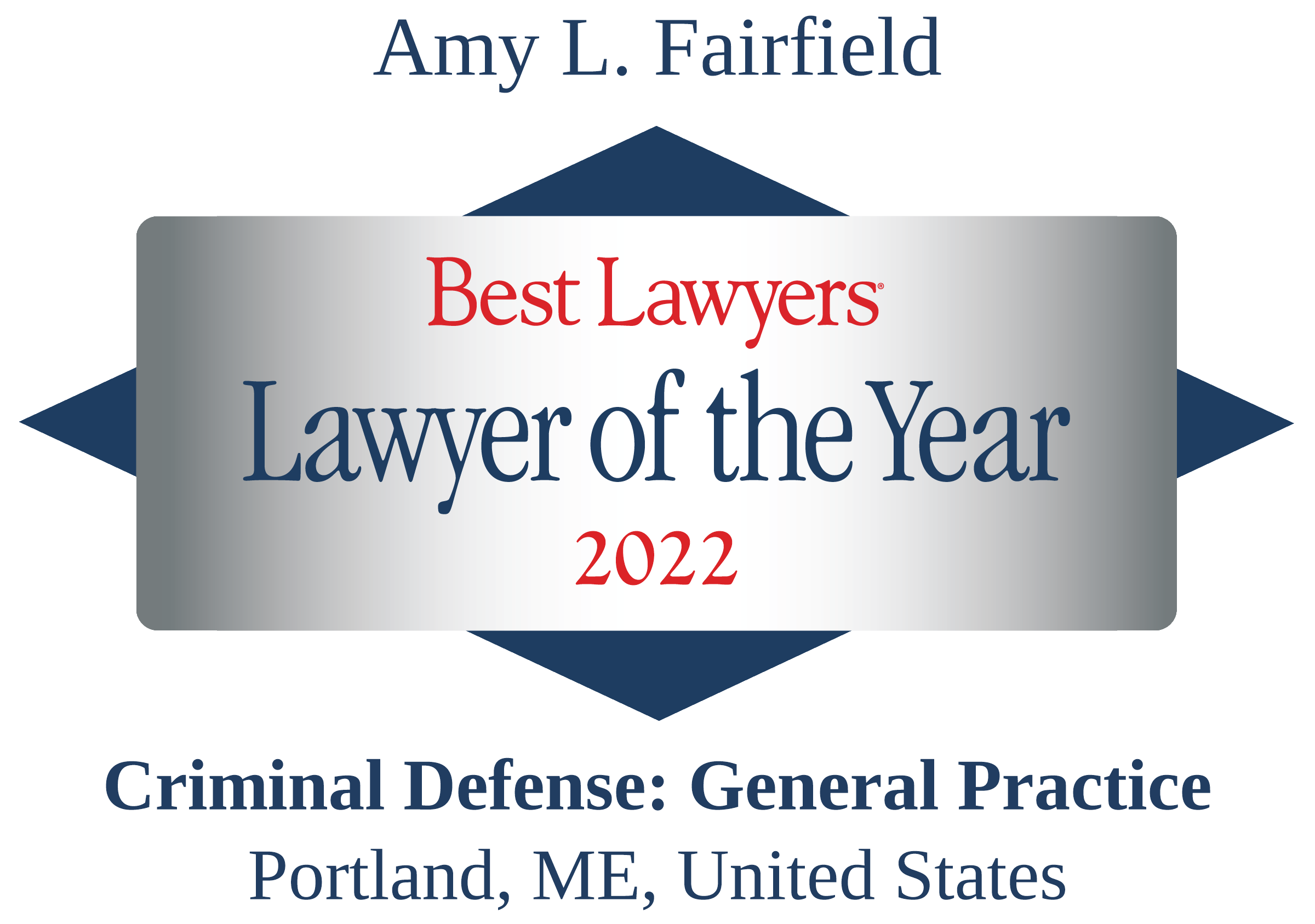 Only a single lawyer in each practice area and designated metropolitan area is honored as the “Lawyer of the Year,” making this accolade particularly significant. These lawyers are selected based on particularly impressive voting averages received during the peer review assessments.

Receiving this designation reflects the high level of respect a lawyer has earned among other leading lawyers in the same communities and the same practice areas for their abilities, their professionalism and their integrity.

In addition to the “Lawyer of the Year” award, Amy L. Fairfield was also listed in the 2022 edition of The Best Lawyers in America® in the following practice areas:

Since it was first published in 1983, Best Lawyers has become universally regarded as the definitive guide to legal excellence.

Amy L. Fairfield is an accomplished and tenacious trial attorney. She has spent more than a decade representing the people of southern Maine. She is committed to protecting the rights of her clients, and her determination and experience are unparalleled.Amy offers her clients the benefit of her extensive and varied litigation history. During the course of her career, she has been lauded by the Maine legal community for her success in defending clients in some of the most serious cases to occur in the state.In 2015, she subpoenaed the State of Maine on behalf of a client, successfully demanding that the Department of Health and Human Services be held accountable for violating a court order.In 2014, she forced the State to dismiss charges against another client, after the Town of Buxton arrested him for a crime he did not commit. Amy is currently engaged in a suit against Buxton and its police officers on behalf of that client.Amy’s practice is centered on serious and complex criminal cases. In addition, she practices family law, including divorce and allocation of parental rights and responsibilities. Amy is a rostered Guardian ad Litem.

Amy established Fairfield & Associates, P.A. in 2004. Over the years, she has represented thousands of people charged with a diverse array of crimes, both felonies and misdemeanors. Amy graduated magna cum laude from the University of Southern Maine in 2000, with a degree in political science. She graduated from the University of Maine School of Law in 2003. Amy was named Unsung Hero in 2010 by the Maine Association of Criminal Defense Lawyers (MACDL). The title is awarded annually “to the one criminal defense attorney who best exemplifies the highest level of commitment, passion and tireless pursuit of justice in the representation of indigent defendants. ”In 2018, Amy was awarded the MACDL President’s Award, which is given each year “to the criminal defense attorney who best exemplifies the goals and values of MACDL and the legal profession.” To date, Amy is the only attorney to have received both the President’s Award and the Unsung Hero Award. In 2015, Amy was appointed to MACDL’s Board of Directors for Region I. Also in 2015, Amy was invited to present on the subject of prosecutorial misconduct by the Maine Board of Board of Bar Overseers at its Annual Ethics Conference in Augusta.

Amy has also given presentations on juvenile defense at a 2014 MACDL seminar; on juvenile bindover proceedings at an advanced training offered by the Maine State Bar Association; and on many topics, including mental health of clients, at a 2012 Maine Commission on Indigent Legal Services minimum standards training.Amy is part of the Clifford Commission. The Clifford Commission’s goal is to have the responsibility for appointed counsel removed from the Judiciary’s budget through the creation of an independent agency that would be separately funded. The stated purpose of the Clifford Commission is to provide efficient, high quality representation to indigent criminal defendants, juvenile defendants and children, and parents in child protective cases, consistent with federal and state constitutional and statutory obligations. She was named a Complaint Justice–also called a Justice of the Peace–in 2005 by Chief Judge of the District Court Vendean Vafiades. She has served in that role for eleven years. A native Mainer, Amy is an active member of the southern Maine community. She has volunteered at soup kitchens in York County and teaches a class on parental rights at the Maine Correctional Center in Windham. By request of the York County Sheriff, Amy serves on the York County Board of Visitors. While Amy loves her job as an attorney, her favorite job in the world is being a mother to her daughter, Brynne, and her son, Keegan.